Home / Entertainment / Davido Reacts As Fan Explains Igbo Tradition To Him, Says He Might Loose His Son

Davido Reacts As Fan Explains Igbo Tradition To Him, Says He Might Loose His Son

A fan has succeeded in getting Davido‘s reaction after he explained Igbo tradition to the singer, which according to the fan, the singer might lose his son to another man if Chioma marries someone else.

It all started after the popular singer shared a piece of advice on his social media page which he said excludes the married one.

In a quick reaction, the fan corrected the singer that he is no married yet adding that he is still on ‘hired purchase.

Reacting to the fan’s statement, Davido pointed out that any man that tries such with him would die.

See Their Exchange Below: 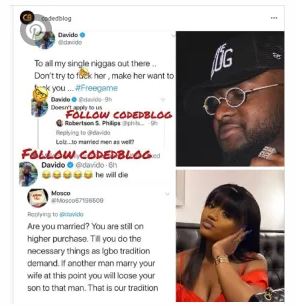