Nollywood actor, Alkali Matt, better known as Dareng, has passed away while filming on a movie set on Tuesday.Alkali Matt

Nigerian actor, Alkali MattDimbo Atiya broke the news on his Facebook as he revealed the actor died “suddenly while he was filming on a set for an epic movie in a village near Keffi.”

The news of his death comes as a rude shock as he was quite popular for his role as Dareng in the African Magic series “Halita.” 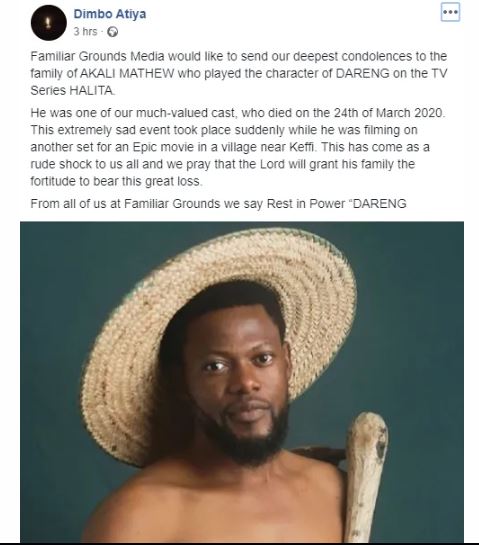 Related ItemsAlkali Matt
← Previous Story ‘Matt Alkali And Rotimi Adigun’s People Are Trying To Bribe Me’ – Kemi Olunloyo
Next Story → Do You Agree?? Coronavirus Is Making Everybody Realize There Is God – Shatta Wale