Another Man has jumped off the third mainland bridge into the Lagos Lagoon, just 11 days after a 22-year-old man, Daibo Davies, abandoned a cab as well and plunged into the lagoon.

The unnamed man has been rescued after jumping off Third Mainland Bridge into the Lagos Lagoon.

The Rapid Response Squad (RRS) said in a tweet on Thursday that the man alighted from a cab on Wednesday night claiming he wanted to urinate.

He jumped into the lagoon but landed on a log of wood before being taken to a hospital, it said. 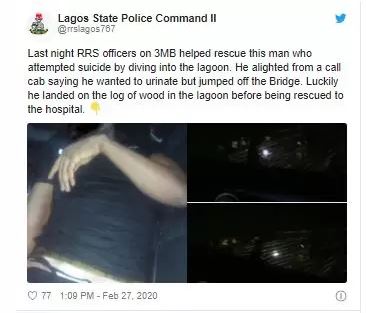