Home / Naija News / SO TOUCHING!! Nigerian Man Shares Reason For Walking Away From His Mother (Photo)

SO TOUCHING!! Nigerian Man Shares Reason For Walking Away From His Mother (Photo)

In a photo shared on the Internet, a Nigerian man has shared details on how he walked away from his mother.

The man, identified as Wole, pointed out that his mother has always said hurtful things to him and it was in her nature to always do that.

Wole, however, pointed out that, following his father’s death and another episode with his mother, he decided to walk away.

Wole also says that no effort from anyone would make him return to his mother as he pointed out their relationship has dimmed out.

Nigerian Man, Two Others Sentenced To 49 Years Imprisonment Over Fraud

Wole also advises families to be careful with what they say in anger to other members. 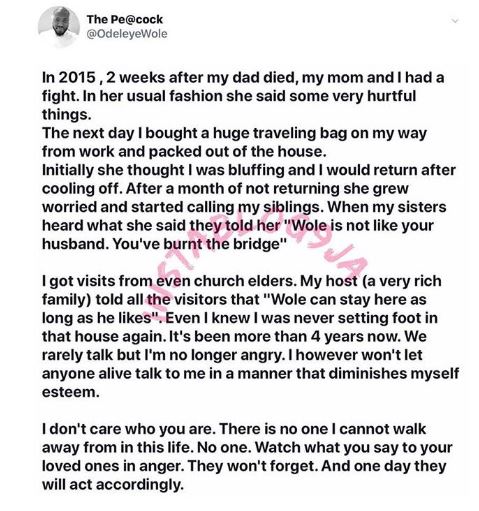 Related ItemsMother
← Previous Story Do You Agree?? Lai Mohammed Is The Biggest Liar In History Of Nigeria: Fani-Kayode
Next Story → Nigeria, US To Sign Agreement To Repatriate $321m Looted Funds